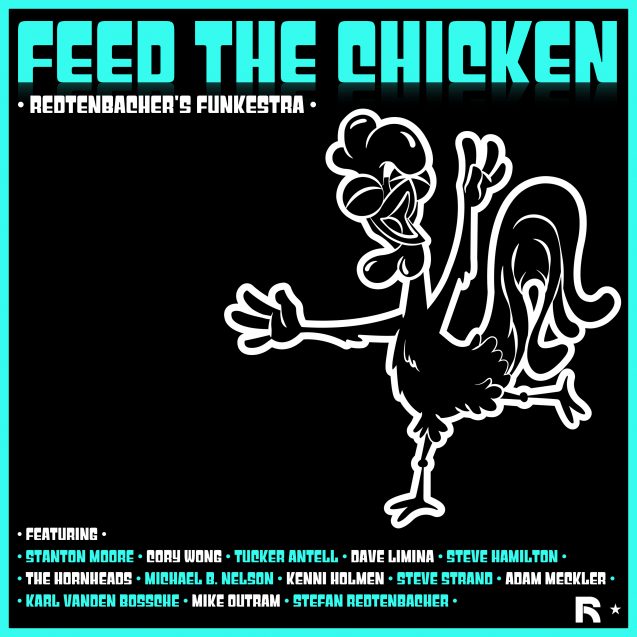 Straight to it – mould your earlobes around this one HERE!

Any Funk music lover worth their salt will know the tune ‘The Chicken’. Written by former musical director and tenor saxophone player Pee Wee Ellis and lifted to further heights by legendary bassist Jaco Pastorius, ‘The Chicken’ remains a classic and a favorite at jam sessions and impromptu music at get-togethers. Possibly needless to say, but I always loved this funky opus.

Ever since I saw Jaco Pastorius close and upfront at a trio concert with guitarist Birelli Lagrene in 1986 in my home town (one year before the great man died in tragic circumstance) I was not only hooked on bass but the jazzy/funky shizzle in general.

Of course it was a great honor to record the man who wrote ‘The Chicken’, in short ‘PW’ on ‘Walkin, Struttin, Strollin‘ – for ‘The Time Thief?’ album – great to have him and trombonist Fred Wesley on my records – a direct line to late and great – of not greatest of all – James Brown.

Overall, it’s a lovely feeling to harbor notions of ‘Purveyor of Funk’ or ‘carrying the baton’ alongside so many of my great pears. This has lead me to ‘Feed The Chicken’. Of course this tune has nothing to do, nor sounds anything like the funkilicious original – however, the title – which came about by asking an open question on Facebook to known (and unknown friends) – has resulted in this title, which immediately struck a chord with me, i.e.’Feed the Chicken’ meaning – ‘Feed’ the spirit of Funk Music and one of its shiny representatives: ‘The Chicken’. I think I should trail down my Facebook wall to find the name of the lovely man who cam up with the title. I think he and his party of friends came once to a gig at the 606 to hear the newly christened tune in person. All this might seem arbitrary and irrelevant to some (naturally), however, the way my mind is wired – I love it!

Before we recorded the tune we’ve already performed it live quiet a few times and it seemed to have staying (and recording) potential as the audience always seemed to take to it with great aplomb. Not the least because of the drum fills and solo of Mike Sturgis and at times percussionist Karl Vanden Bossche.

When it came to recording the tune it was Mike ‘The Oracle’ Sturgis idea to ask Galactic and Menage a Trois New Orleans drummer Stanton Moore to lay down the foundations. In April 2007 Stanton Moore came down to the 606 Club with Mike Dolbear and sat in with the Funkestra (Watch here). His energy and approach really inspired us all and his funky vibes found their way into our way of making music (‘Concubine Chronicles‘). Asking him to record with us seemed a natural development – after all – this one of jam stayed with us for all these years. Watch Stanton record ‘Feed The Chicken’ HERE. Thank you Mike Dolbear for the hook up! 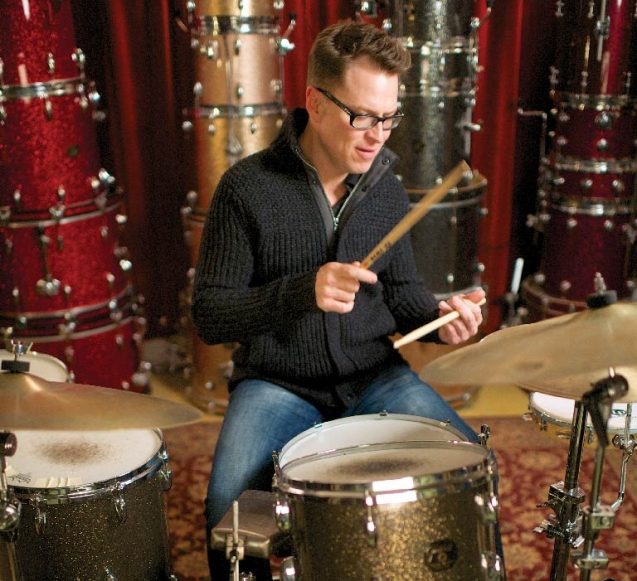 Michael B Nelson – trombonist and leader of the horn section ‘The Hornheads‘ (formerly New Power Generation horns for Prince, now horn section of the Wongtones) has already collaborated with me on ‘The Cooker‘ and ‘The Time Thief‘. Great fun to have him back to record ‘Feed The Chicken’ with his men. Very much enjoying his trombone solo too! Michael, who is based in Minneapolis also suggested guitarist Cory Wong to me who now is known for his work with Vulfpeck and The Fearless Flyers. A real treat to have him and guitarist Mike Outram on the same track – this is a lot of funky ‘firepower’ in the guitar department! 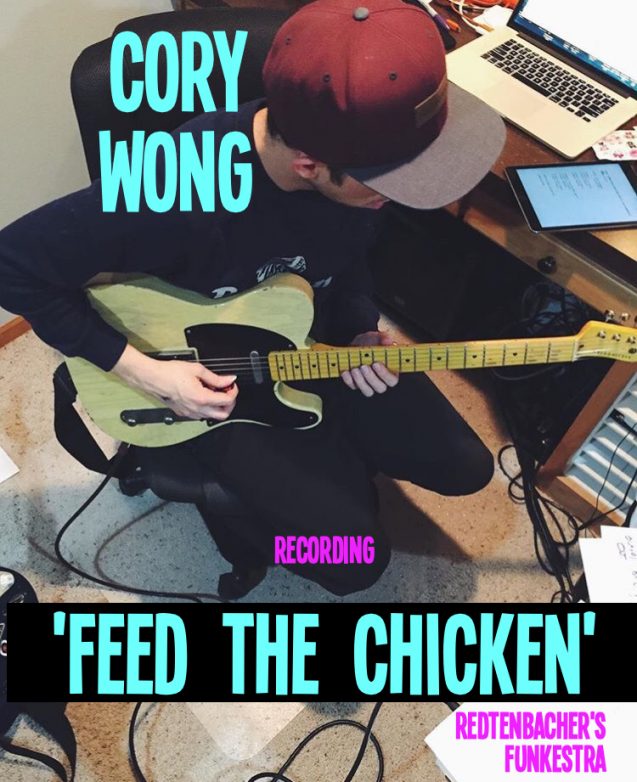 Tucker Antell is playing the tenor sax solo on ‘Feed The Chicken’. As you might know, Mike, Eran and myself went over to Boston this spring to record the first solo album with Hammond organ player Dave Limina, now head of piano department at my old stomping ground Berklee College of Music. This is when I met raising saxophone star Tucker Antell. We’ve stayed in contact since and I’m pleased to have Tucker on the track. If you like it – great – more adventures with Tucker and his men to come. 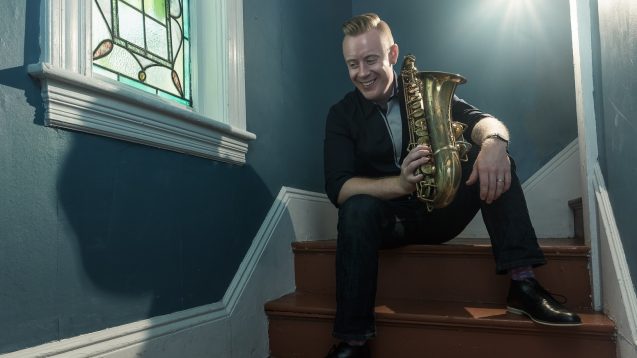 [Probably for bassists only] From a bass point of view it was great fun for me to dust off my Akai Deep Impact FX pedal – the one that makes my bass sound like a bass synth – I forgot how much I love this pedal! Overall my bass line is staying out of the way of all the bubbling sixteenth-note goodness in the mid-range of the rhythm section – hopefully this come across and isn’t just me – haha! I tracked it with my Jazz Bass on the back PU, a fairly’honky’ sound to not compete with the serious bass frequencies that the Deep Impact is chucking out. As you probably know, The ‘Deep Impact’ is a vintage pedal but if you want an updated version – check out the ‘Future Impact’ pedal by Pandamidi – built by Mr Andras Szalay, the same engineer who designed the original one, distributed by G?bor Ger?nyi.

Listen on your favorite service HERE.

On Wed, 16th of January 2019 ‘Feed The Chicken’ will be released on Apple iTunes and Apple Music – we had to re-design the cover slightly because Apple apparently doesn’t like to have all the performers names on the cover. I was slightly taken aback as all the classic Blue Note records (and numerous others) always list all the performer’s on the cover, regardless if they are the ‘stars’ or featured or not. I generally like to give as much credit to everyone involved so I somewhat begrudgingly had to simplify the iTunes ‘Feed The Chicken’ cover. All good now:-) 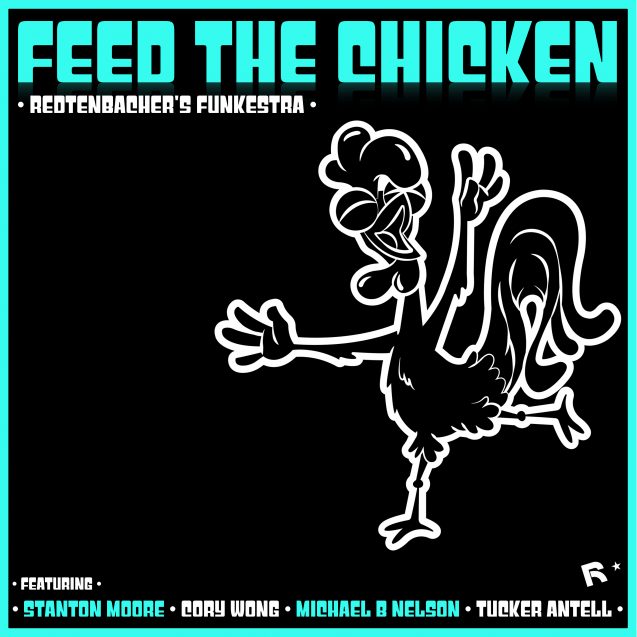 BIG BAND LEADERS – in case there is any interest in performing ‘Feed The Chicken’ with your Big Band – I have the full score and parts for 13 horns (4 trumpets, 5 saxes, 4 trombones) and standard rhythm section (drums, bass, guitar, keys), possibly with an additional guitar and keys part. Just send me a message and we’ll sort something out. I?m always super-excited when a ensemble somewhere in the world is performing my music. So far this happened in the US, the UK, Germany, Austria, Holland and Denmark. Looking forward to adding more countries to this in the new year. Ping me!

Needless to say, I could go on about all the sub-stories around ‘Feed The Chicken’ – however, I’ll hope you are enjoying the track and I?m back in the studio preparing the next releases. Would want you to starve you of my funk adventures – haha! Thanks for listening, reading and any other support you are kindly providing for my funkified journeys.

Credits for ‘Feed the Chicken’: