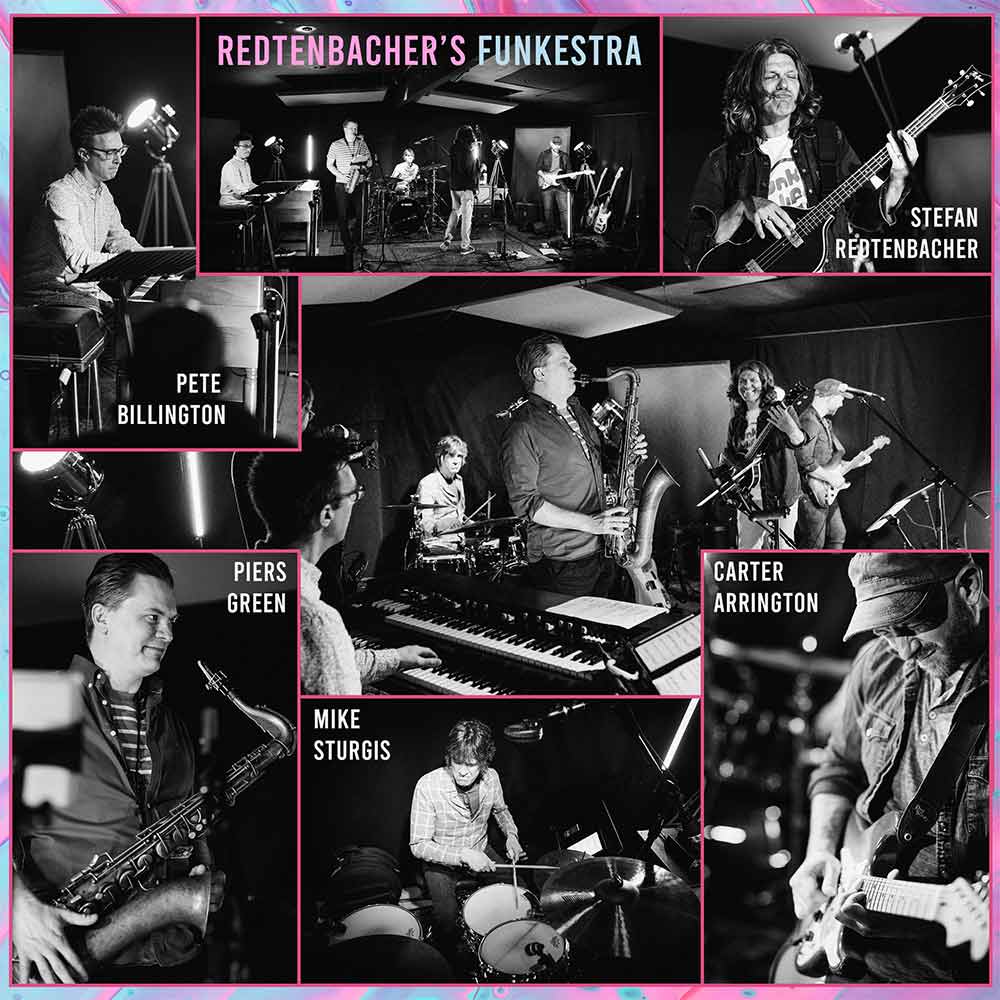 Watch the Redtenbacher’s Funkestra | LiveatMasterlink. A live streamed concert in front of an exclusive audience. It was streamed out of Send Hill Studios in conjunction with Masterlink Productions studio and hosted by high-quality streaming platform True Live.

Watch HERE and hit the TIP JAR if you like it and/or share with friends and family.

‘CHUGG’ written by Dave Limina. This happy ‘stomper’ of a tune features saxophonist Piers Green and keyboarder Pete Billington (he also plays great guitar, bass guitar, double bass and the viola…say what?). We first played this tune with Dave Limina (piano chair of Berklee College of Music) for a Masterlink Session in 2019. You can watch it HERE.

There are many cool moments and really like the breakdown for the saxophone solo when keyboarder Pete Billington plays chords on the Wurlitzer and bass on the Hammond. Great sax solo routed in Funk tradition of Maceo Parker and David Sanborn. Great fun to hear Pete and Piers trading licks at the end of the tune.

As this was a pilot you’ll notice that the audience didn’t have their own microphone. They were a great bunch and a noisy one at that. Next time we’ll catch them ‘on tape’ too!

I hope that Dave Limina will release this tune on his solo record soon! It has such a positive energy and a great Hammond organ showcase.

‘CAROL’ dedicated to session bass legend Carol Kaye, written by Stefan Redtenbacher. ‘Carol’ was recently released as a single and will form part of the upcoming Funkestra album JONKY. In this rendition we feature guitarist Carter Arrington – a newcomer to the ever growing Funkestra collective. A very exciting player as you can hear for yourselves. Check out his latest collaboration album with drummer Kirk Covington (Tribal Tech) called ‘Gamelan Road’. It also features Pete on Wurlitzer – very fun to hear him ‘blow’ on this mid-tempo ‘groover’.

‘BDR529 ILLINOIS’ dedicated to the 1974 Bluesmobile from the Blues Brothers movie, written by Stefan Redtenbacher. We recorded this chilled out Blues for a Masterlink Session – the first one with full band after a long hiatus of endless lockdowns. You can watch the original recording HERE. The melody is tastefully played by Carter and Piers follwed by a exciting guitar solo with clean and crunchy sounds. Piers plays a soulful solo over a sparse and airy rhythm accompaniment – love his sound! Pete rounds of the solo offerings with a riveting Hammond organ solo. Thank you Josh Phillips (Procul Harum) for lending us your fine instrument! ‘Playing the Blues’ in Surrey. This track will be released on HOWLING AT THE BLUES, another forthcoming Funkestra album.

‘FLUFFBALL’ written by Stefan Redtenbacher. We recorded this Jazz Funk/Jazz Fusion tune for a recent Masterlink Session. You can watch it HERE. Piers is playing a delightfully rhythmic solo over our heavy hitting funk vamp followed by some lush chords with a saxophone/guitar unison melody – very 70s! Carter jumps right in and plays a Jazz Fusion inspired solo over our two chord vamp – can’t help to think back to Scott Henderson’s solos with Tribal Tech way back in the day. Pete clearly enjoys himself on the harmonically rich tag and plays the tune out with great touch. This tune will most likely also end up on the JONKY album.

‘KERRIA LACCA’ written by Stefan Redtenbacher. We first released this on the album THE HANG and it has become a very popular Funkestra track. On Spotify alone it is coming up to half a million streams. MUSICIANS! You can also download the lead-sheet for this tune HERE. It is also the signature tune for the MASTERLINK SESSIONS podcast series. In this performance Carter showcases his exciting approach to playing guitar solo over a funk vamp – great sound, feel, rhythm and guitar language! The chords at the end nod towards the chromatic chords in ‘Birdland’ by Weather Report, written by Jo Zawinul. Piers seems to enjoy the fast moving chords over a groovalicious funk vamp. 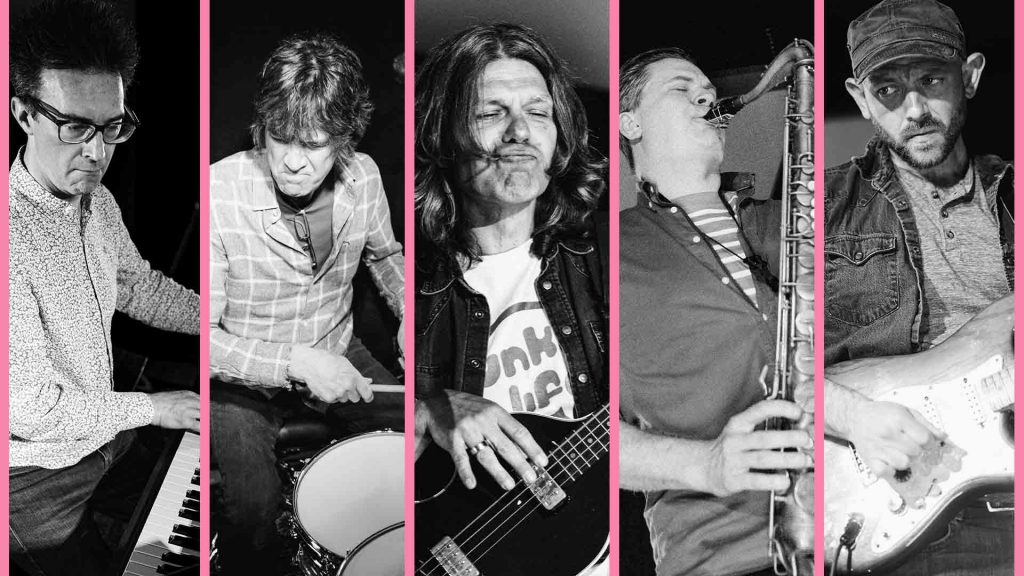 ‘PLANTATION INN’ by the Mar-Keys. I think of the Mar-Keys as Booker T & The MGs with horns (The Memphis Horns). They were the de-facto studio house band for the legendary Staxs records, home of Southern and Memphis Soul. Their bassist Donald ‘Duck’ Dunn has been an influence on my playing from the very start. Pete, Piers and Carter seem to really enjoy to ‘blow’ over this ‘easy groover’. Although harmonically simple it is deceivingly hard to create the easy flow of this tune – it’s the first time we’ve played this for a live show and I’m looking forward to adding this to our live shows.

‘LIVE YOUR BEST DREAM’ written by Stefan Redtenbacher. We recorded this first as a trio – Mike Sturgis, Carter and myself to experiment with a smaller set-up. For this live stream we expanded it to the quintet and hope to add a version of this Jazz Funk/Fusion tune to JONKY. I’m in two minds whether we should a horn section to it or record with the small line-up. Either way it will remain a guitar feature for Carter who really let’s it rip on this one. Towards the end of the guitar solo we are defintely entering the guitar fusion world and hey! why not – in context of the whole show we really enjoyed playing this. We also dig the near-psychedelic space vibes at the end of the tune. Creating sound effects and atmospheric textures is a welcome addition to our music.

‘GHOST FISH’ written by Thomas Feurer and Stefan Redtenbacher. Another chilled out track which will end up on HOWLING AT THE BLUES. We first recorded this for a Masterlink Session which you can watch HERE. Harmonically this is a ‘lush’ piece of music featuring Piers and Pete. In the footsteps of The Crusaders and Stuff we are firmly entering the Soul Jazz territory – a good juxtaposition to our harder hitting Funk offering. I love the Gospel feel of this tune – very chilled!

‘CAT HERDER SCUFFLE’ written by Stefan Redtenbacher. This is another guitar feature which we originally recorded with Carter Arrington in a trio setting. Another blues inspired tune which lends itself perfectly to the HOWLING AT THE BLUES album. Carter really let’s rip on this one! I love how Pete ‘heckled’ me from the sides and questioned the logic of my tune naming. Good to also play a good ol’ shuffle in the set. Recently drummer Mike Sturgis was back out with Wishbone Ash and is clearly well acquainted with this feel.

‘MONSTER FUNK’ written by Tucker Antell and Stefan Redtenbacher. Originally released on THE HANG and another Funkestra favorite. Coming up to three hundred thousand streams on Spotify you can also download the lead-sheet from our FUNKSTORE. The tune features a bubbling bass line and all players trading licks, including drummer Mike Sturgis. Unbridled Funk fun!

‘HOT JAM’ written by Stefan Redtenbacher. This one will be be released as a Masterlink Session in the coming months and will also be included on the HOWLING AT THE BLUES album. A scrumptous half-time shuffle (hello Jeff Porcaro) with fierce solos by Carter, Pete and Piers. Rockin’ Hendrix vibes at a Funkestra gig – yes!

I hope you’ll enjoy Redtenbacher’s Funkestra | Live at Masterlink as much as we all enjoyed creating the event. Thank you all for your support!

Dear music lovers! We have some very exciting news for you. This Friday, April 22nd…

All we are saying | Fundraiser for Ukraine

Dear all, Let me tell you about 'All we are saying | Concert for Ukraine'.…