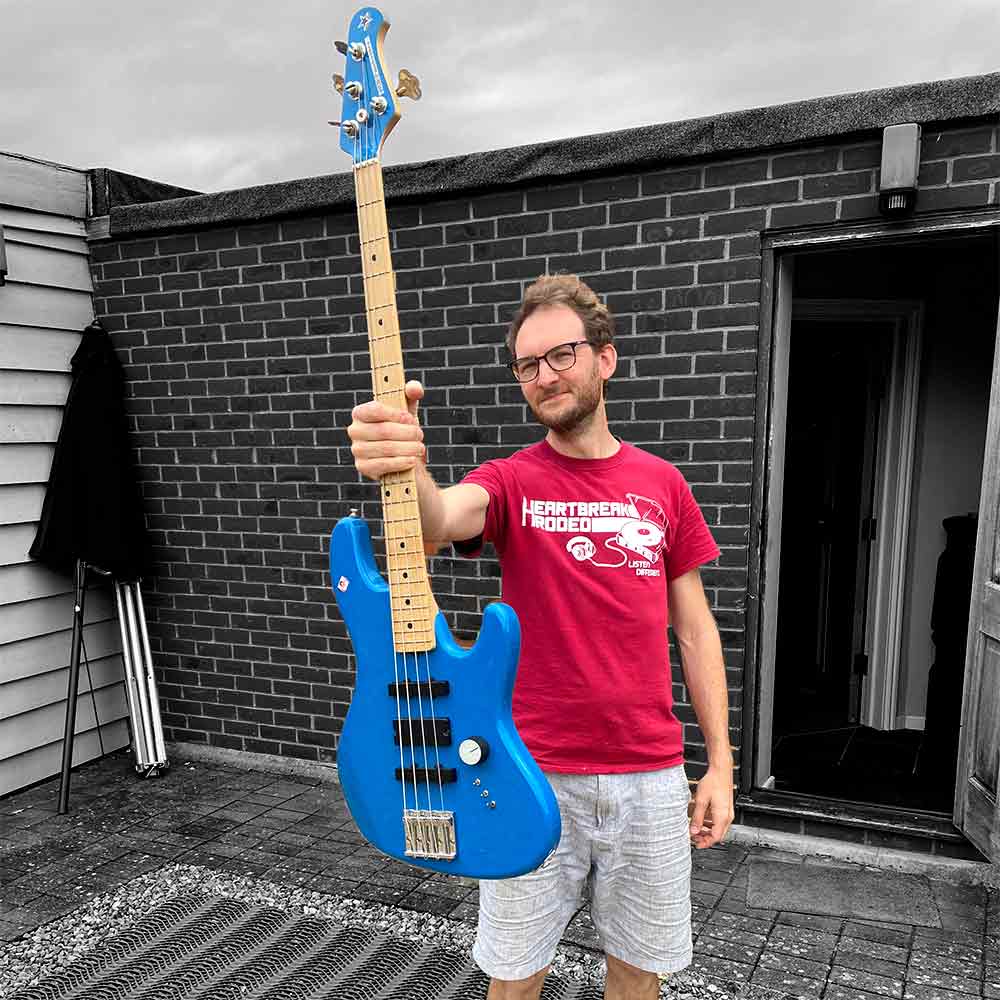 The Herman bass guitar story tells the tale of a unique one-off bass guitar as told by bassist Stefan Redtenbacher.

The beginning of the journey

I’m not exactly sure when ‘Herman’ came into life – I reckon it was around 2006 or so. It all started when Beth Wreden, the then US Ernie Ball representative gifted me with a neck for my Music Man Sterling which I bought around 1995 in Bosten whilst I studies at Berklee College of Music.

The story of my beloved blue Music Man Sterling is the precursor to the Herman story. I bought the Sterling as the string spacing felt more akin to a Jazz Bass than the ‘Music Man Sting Ray’. It was never meant to become my main bass – rather than a ‘stop gap’ bass whilst I was waiting for Roger Sadowsky to build me my beautiful custom shop 5-string. Flamed maple body with green see through finish, maple neck and the Aguilar pre-amp if I recall well.

I remember the day I received it. Sometime in the late morning I had a soundcheck at the Berklee Performance Center for a ‘singer’s showcase’ (?) showing up with my blue Sterling. As an aside – I recall Dennis Montgomery III having a dig (rightfully so!) because I didn’t know how to play an old Fats Domino song by ear. Sometime in the afternoon my Sadowsky arrived and I went to the 2nd soundcheck of the show. Fun fact – The sound engineer used the talk back through my monitor saying this: “Hey man, where is the other bass. The blue one. It sounds way better.” I guess that dampened my ‘kid at christmas’ feelings about my spanking new green Sadowsky 5 string.

By now I can’t recall why I asked for a new Sterling maple neck but somehow I ended up with one and did not replace the original one as planned. I can’t stand waste so I couldn’t just let the neck sit there in a corner without being used. In comes the Bass Gallery.

At the time I lived in Notting Hill. There were many trips to Martin Peterson’s awesome Bass Gallery in Camden. He is a top guy who really knows his stuff, has always great bass equipment in his store and developed a bass community in the form of an informal ‘bass hang’. Martin also custom builds his own basses under the name of Sei Bass. The experienced luthier always let me noodle on various basses for way too long – what a patient man – and was kind enough to run with my idea to stick my Ernie Ball Sterling neck on a Sei Bass Jazz Bass body.

Now that we created some type of a ‘bass monster’ or ‘Gestalt’ of different bits the naming ceremony came easy. Many bassists have gone down the route of creating hybrid bass guitars – John Entwistle from the Who named his bass ‘Frankenstein’, for example.

“That was Frankenstein, which I made from dead parts. I had a day off in San Francisco once and spent it screwing a bass together from five smashed Precisions including a couple of slab ones of which they only made about 20.” (Quote from April 1994 Bassist interview)

With the name ‘Frankenstein’ claimed by one of the greatest rock bassists ever I thought of other names to do with monsters. Aha! What about HERMAN MUNSTER from ‘The Munsters’. As a kid I loved this TV show with actor Fred Gwynne starring as the Frankenstein’s monster. Bingo! Herman the bass guitar it was.

In addition to the unique neck and body combination I also wanted to experiment with a multiple pick-up configuration. Being a Bootsy Collins fan of course I’ve noted his various basses with more than two PUs. (Here an interesting article about Bootsy’s basses in the mixdown magazine).

We settled on three pick-ups and Kent Armstrong came to rescue and hand-wired three fine specimen for Herman. Now we had to wire all the stuff together.

Top bass electronics man John East from East Tone UK was kind enough to invite me to his workshop and indulge me in my bass electronic needs. My wish-list:

– no other knobs, but instead only switches for each pick up (on/off, series, parallel)

– all passive, no battery

We conducted some tests. Soon we realised that we couldn’t get the bridge pick-up loud enough when all pick-ups were in the ‘on’ position. So he whipped up a pre-amp for the bridge PU which had to be powered by a battery after all. A small price to pay, I’d say – thank you John!

Once it was all ensembled and working fine I left it to my wife to pick the colour. Both for the body and the headstock. This is why Herman turned out to be cornflower blue. Oh yes, and before I forget – Herman sports a Badass Bridge. The tuning pegs are the original Ernie Ball ones.

Now that you know how Herman was brought to life you probably wonder what I actually did with it? Well, it got A LOT of laughs. I used to teach an arrangement module to ACM students way back in the day. Herman would always be present when it was time to teach all musicians about the bass guitar. I can tell you – the ‘helicopter’ on/off switches and the MASSIVE volume knobs always brought entertainment value to the classroom!

I haven’t delivered any formal lessons for over 10 years and this is probably how long Herman was in a deep slumber in a beaten up case. When James Welsh – audio wizard and all around instrument maintenance guru opened the case for the first time in a long time – he was first of all not blown away by Herman‘s good looks, but instead by the smell of mould pertruding from the case. When we plucked him in we were faced with a leaking battery. After the soldering iron came out and a bit of toing and froing James manged for Herman to make a sound again! Albeit – way too hot with all PUs on!

However, when using only one or two PUs – yes – a zinging sound kicks out of Herman. In particular with a pick – rocking!

After James gifted me a battery clamp and fixed the battery cover he re-united me with Herman (see picture). When the right rocking track comes along I surely will rock out with this monster of a bass. Who knows – I might even sport Herman for a future Masterlink Session. Could he take on ‘Princess, the first’ or ‘Blondie’. Stay tuned and find out!

I hope you enjoyed my story of Herman the bass guitar. Feel free to PM me or leave any comments below.