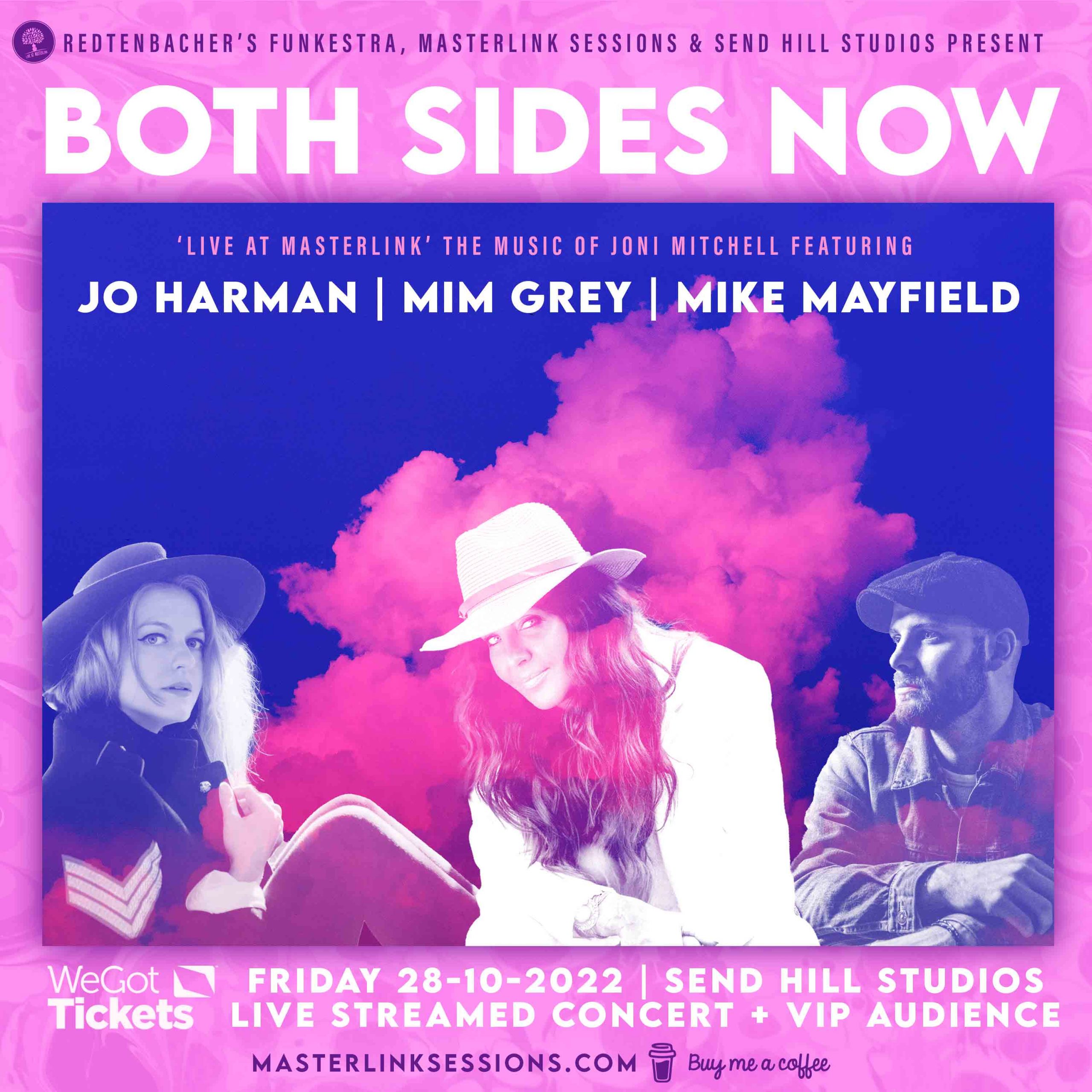 The Masterlink Sessions team are putting on this special live-streamed concert.

It will take place on FRIDAY, OCTOBER 28th, 19:30 at SEND HILL STUDIO, just off the A3 and near Woking and Guildford trainstation. Also, super-easy and convenient parking right outside the venue.

As ‘Both Sides Now’ would suggest we are continuing our longstanding love affair with the songs of Joni Mitchell. We are not aiming to put on a ‘Joni Mitchell tribute act’ rather we are celebrating her immense artistry, creativity and songcraft by creating our own re-imaginations of our favourite songs.

The entire Masterlink Sessions team is very excited to not only have three genuinely fabulous vocalists for this show but also three immense Joni Mitchell fans.

In the past we have already created some beautiful music with the mesmerising Jo Harman, recording her EP ‘Signature Soul’ and filmed two Masterlink Sessions. Mike Mayfield has visited us to create a Masterlink Session for one of his original songs and a riveting performance of ‘Both Sides Now’ (on all major platforms on Friday, 16th of September) as well as a ‘Live at Masterlink’ solo show streamed on True Live (feel free to watch HERE).

Their manager Mark Ede from BiGiAM management, a key ally in putting this whole thing together (BiG shout out to him right here!) has also introduced us to vocalist Mim Grey and enthusiastically sings her praises. As always we trust his musical judgment and we can’t wait to create some Masterlink Sessions with her and have her perform her favourite Joni Mitchell tracks at this special concert on Oct 28th.

The three wonderful artists will be accompanied by the Masterlink Sessions studio band (a.k.a. the Redtenbacher’s Funkestra) with Mike Sturgis on drums, Pete Billington on keys, myself on bass as well as an additional guitarist (TBC) alongside Mike Mayfield who not only is a brilliant singer but also pianist and guitarist for many household-name artists.

A big shout out also to the production team ahead of time as they are already preparing this special event. Pete Mills, the ‘godfather’ of Send Hill will see to the front of house sound and lights in his Send Hill Studio. He is also looking over the practicalities of the entire production (including parking, outside marquee and everything else). Having been Elton John‘s trusted road manager for decades we are in safe hands. Audio wizard James Welch will make sure we have the best sound possible for the live stream and recording – over in his studio Masterlink Productions (in the same facility as Pete’s studio on the same compound) and Leo Mansell will be the all-seeing- eyes, i.e. film the entire event with his hand-held gimbal camera.

We are also excited to set up Pete’s studio with new chairs and a quasi photo exhibition of huge prints by our friend and key partner Rob Blackham from Blackham Images.

As always, aside from my musical duties,  I’ll give it my best shot to be the anchor for the Masterlink Sessions team combining all the different strands of interest and working closely with Mark, who looks after the vocalists.

Shout out also to my Photoshop guru Neil J Hart who is always is by my side when I create all the visuals for an event like this one.

If you want to be a VIP and join one of the 25 people who will form our very special audience in the room, get yourself a ticket HERE from WeGotTickets.

The live show tickets are £25 and are limited to 25. So reserve your ticket now to avoid disappointment. This is is going to be a special occasion and you can be there right in the midst of it.

If you can’t be there in person and would like to watch the concert from home you can buy at ticket from True-live, our trusted streaming partner HERE. It is €10. You can also hit the TIP JAR before and during the concert. Be there (online) or be square as the live-streamed concert will not be available in full after the 28th of October.

As an alternative to the above you can also buy on of the 25 limited tickets from BuyMeACoffee HERE. Print out your own ticket and get it signed by the artists on the day.

We hope to see as many of you as possible for this ‘Both Sides Now‘ VIP concert – either in person in the room or on your screens back home.