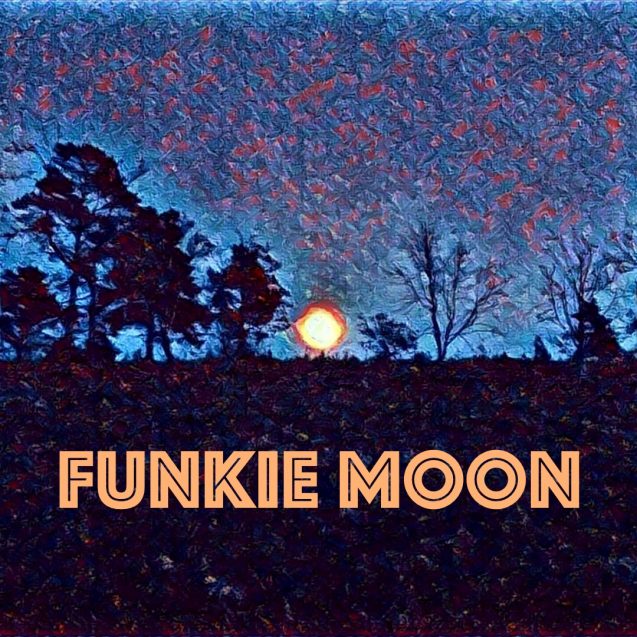 The journey of ?The Funkie Moon? started with Mike Sturgis getting a hold of a compilation album called ?It Ain?t My Fault? by Smokey Johnson. As a rhythm section we long have been in love with the music and grooves of New Orleans – classic bands like the Meters, Neville Brothers, Dr John, Professor Longhair, The Wild Tchoupitoulas, Eddie Bo and contemporary artists like Galactic, Dirty Dozen Brass Band, Stanton Moore (click here to see him sit in with the Funkestra), Dumpstaphunk, Trombone Shorty and many others feature greatly on our playlist.

All the tunes on ?The Time Thief? are originals but with ?Funkie Moon? we made an exception and created our own arrangement – the centerpiece being the fantastic drum groove around the catchy riff.

Before we went up to Monnow Valley Studio to record the rhythm section, the tune was already well bedded in as we often used it as the opener for our live shows. Mike customarily plays a drum solo in the middle section – what I really like about it, is that it is in keeping with the groove and feel of the original song, you could call it a ?groove solo? – which I love dearly as it shows his musicality and maturity as a player – the rock of the Funkestra! In the studio we had great fun recording this one – in the first solo section Dave Limina and Rob Taggart are ?trading? licks and Eran Kendler plays one of his electrifying solos with which he regularly electrifies the crowds at live gigs. Mike played this really cool groove with a tambourine mounted to his drum kit – it sounds like 3 drummers playing at the same time! I recall how much fun it was recording this tune – the guys sounded great and I loved the bass sound that Rupert Christie got out of the Ampeg VST plus 8×10? speaker cabinet – happy bandleader days!

When it came to recording horns – although we have been playing this tune for a while with my horn arrangement – I wanted to involve Paul Jordanous, one of our regular trumpet players in arranging it for five horns and getting his chosen group of players into Stakeout studios to lay down the track (video to come:-). Paul was very upbeat it, jumped right to it and presented me with two different approaches – both of them, to my surprise, with full blown horn features over Mike?s groove solo. Although this wasn?t initially intended it seemed to fit so well to my ears that I went for it – it sounds like Mike?s drum groove and the horn feature were always meant to be!

On the final recording you can also hear a really cool retro filter on the entire section – a brave choice admittedly – but both Rupert ?master-ears? Christie and myself really dug it during the mixing process. It conjured ?The Streets of San Francisco? soundtracks vibes. Originally, probably not envisioned by Paul – however, I had great fun overdubbing the bari sax part with my Rickenbacker with all mutes out and played with a pick.

On a final note I want to mention Piers Green who did a fine and soulful job in playing solo fills between the riff sections – to me he really got the spirit of this great tune!

Smokey Johnson might be gone but hopefully we are helping to keep his funky spirit alive!

Hear the Royal Northern Session Orchestra perform ‘Funkie Moon‘ under the tutelage of Stefan and his iPad. The Big Band horns were adapted from Paul’s arrangement by Peter Tomasso.

Epitaph: Smokey Johnson stopped playing drums after suffering a stroke in 1993. He was forced to leave his home in the wake of Hurricane Katrina in September 2005. Before his death (in 2015) he was a resident of Musicians? Village, a Habitat for Humanity project in the Upper Ninth Ward of New Orleans.