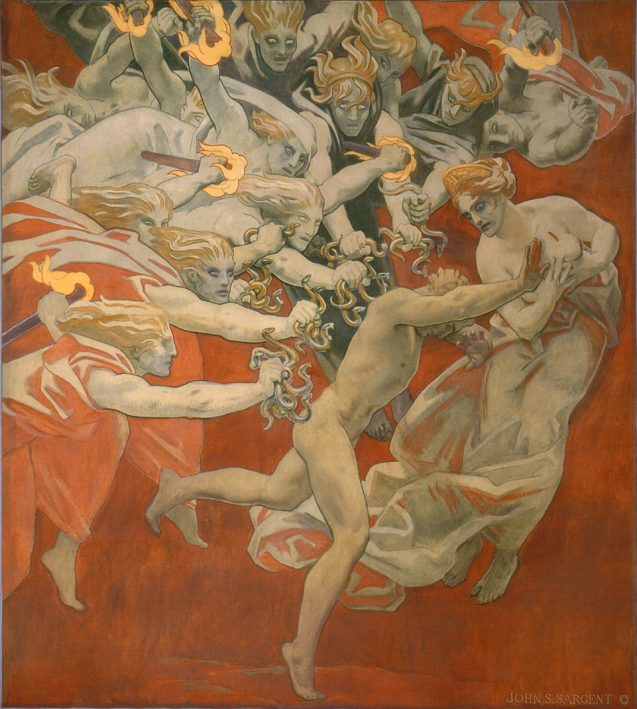 [‘Orestes Pursued by the Furies’ by John Singer Sargent, 1921. The furies are representations of unrelenting guilt. Read more here. ]

‘Guilty’, the opening track of ‘The Time Thief’ album, is a very evocative title and could be associated with many different things. The start of this title was the concept of ‘partial attention’, perhaps talking to someone on the phone and checking emails at the same time…have I ever done this? …erm, I might have and ergo: ‘Guilty’. Trying to be in more (mental) places than one made me think of using multiple time-feels running simultaneously for this tune.

The tune started in my mind as a heavier funk/blues rock tune with tunes like when the ‘When the Levee Breaks‘ by Led Zeppelin and ‘Into the Fire’ by Deep Purple in mind. Over time, performing it live it morphed into something different though. Now I can hear flavors of The Police and also Ska tunes. Rhythmically I do enjoy the three tempos going on at the same time – the original tempo plus the implied half and double time tempo spread across the instruments.

Kathy Jensen’s (formerly member of Prince’s ‘New Power Generation’ [NPG]) baritone sax solo, Dave Limina’s ‘John Lord’ influenced Hammond B3 organ solo and Eran Kendler’s guitar solo on the ‘guitar edit’ version are truly burning on this one! Apologies to the horn players for the awkward key of B minor – they marvelously conquered it anyway 😉

Originally we recorded this tune live at Monnow Valley studio with the rhythm section of Mike, Eran, Rob, Dave and myself only. As the tune progressed in my head though, I had to make the tough call to ditch the drums (and bass) performance completely and we went to Empire Studio run by the fab Sam Burden to redo them. Mike Sturgis also had the idea to play ?fake’ timbales overdubs on top of his drums – these came out great I thought;) 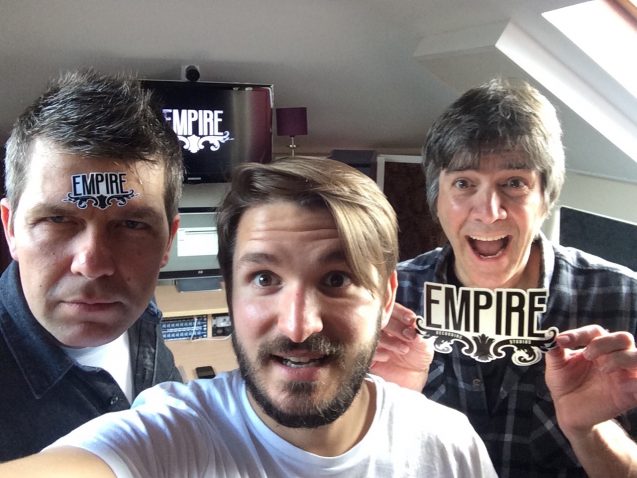 Once I was conceptually happy with the drums I overdubbed with my Hofner ‘Princess’ bass and an Ampeg ‘flip top’ B-15 and went to town with the double-time wah guitar using my Epiphone 335 going through my Princeton amp. My right hand was a little tender after this session…

Michael B Nelson did a great job writing the voicings for my horn lines and also cutting some of my more mundane ideas from the score. He also did a marvelous job recording it with his ‘Hornheads‘ in Minneapolis , a super tight horn section of five who have been playing and recording together for a long time. 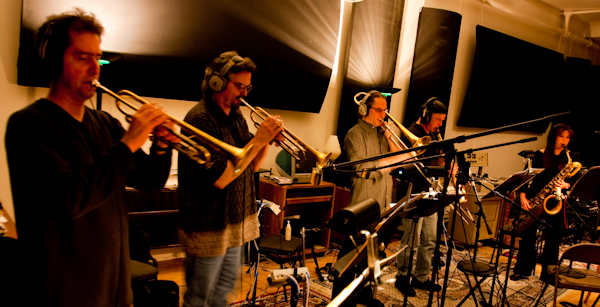 [The Hornheads in the recording studio]

Karl Vanden Bossche overdubbed the percussion with his usual impeccable taste (knowing when to lay out or bring it on) as well as his truly incredible groove. 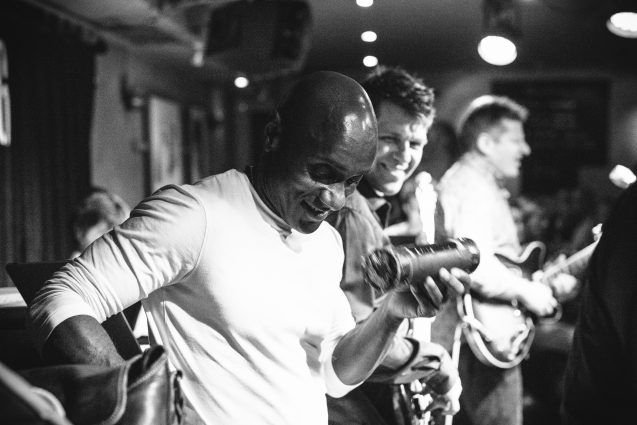 [Karl Vanden Bossche and Stefan during a 606 gig. Photo by Rob Blackham]

Get ‘The Time Thief’ here: