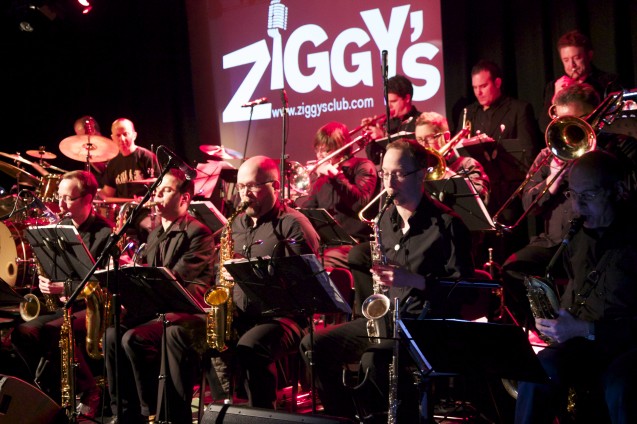 A while ago Steve, his wife Josie and their daughter came down to the 606 Jazz Club to hear us play with the Funkestra. As it happens their daughter really seems to dig ‘Music To Swing Your Handbag To’ (originally recorded on our ‘Hausmusik’ album).

Consequently Steve asked if I wanted to write a Big Band arrangement for the tune so he can perform it with his ‘Steve Taylor Big Band Explosion’…well, I can’t remember the last time I said YES! to anything that quickly:-) When I wrote and recorded ‘Hausmusik’ I wanted to create a Big Band Funk record with lots of 4-on-the-floor beats. ‘Handbag’ was a bit of an anomaly for the record as it features what I call a ‘Sidewinder’ drum beat. At the time it was beyond me to record the whole horn arrangement in one go. Coming back to Steve, what a fantastic opportunity and offer to hear ‘Handbag’ performed live and by a different ensemble. Although Steve offered me the opportunity to sit in at the gig and play bass on the tune I decided to politely decline as I really wanted to be ‘outside’ the ensemble so I can properly listen (any bandleader that leads the band from inside the ensemble will know what I’m talking about…).
And what a thrill it was! Of course, as always, I’d like to change a few notes here and there (some stuff in the altos, some in the 2nd trombone and a few high notes in the lead trumpet) but overall I was very happy with the whole thing.

The good and maybe bad outcome of this experience is that it really inspired me to write more Big Band arrangements for my existing tunes but also to maybe brave it to finally put on a gig with the core Funkestra (Mike Sturgis, Eran Kendler, Rob Taggart, Sid Gauld and Jim Hunt) and augment it with 3 trumpets, 3 trombones and another 4 saxes. I think it would be totally amazing, although at the same time I’m terrified about the organizational possible nightmares and of course finances of it all. Let’s see what happens. In the meanwhile Steve would be happy for me to write a few more arrangements. Yeah!

To round this blog up – first of all thank you and massive thumbs up to Steve Taylor (drums) who not only inspired me to arrange my tune in first place but also has the gumption, drive and energy to run his own Big Band. And rest assured, Steve is also an incredibly fine musician, playing drums in the band and also arranging for the whole thing as he also plays the piano. I have a lot of respect for this guy! And Josie, of course, I know …behind every successful men there stands a woman telling him what to do:-)

As ‘Manbag’ always has been a tenor saxophone feature special mention has to go to tenor saxophone player and ex-Berklee student Vasilis Xenopolous (hey! I know what it feels like to have to spell your name over the phone when paying your gas bill…:-) who played blinding solos, both at rehearsal (which he preferred as he told me) and during the performance. I think they were both great! 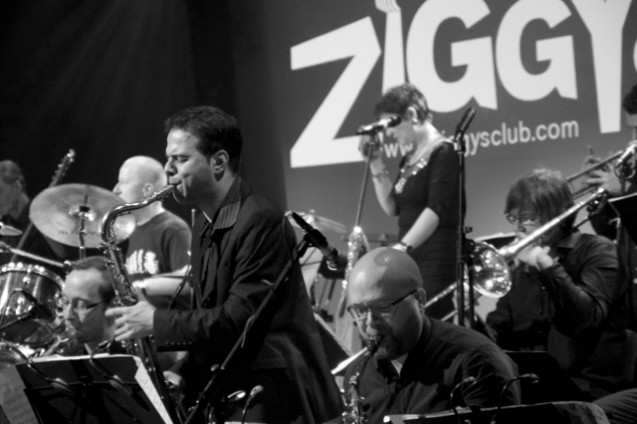 So, all in all, a great Sunday night out, listening to great music played by great musicians and meeting a bunch of nice guys. More please!