By now it almost seems ‘tradition’ to invite guest musicians to appear on our records alongside the killing funk machine that is made up by the wonderful musicians of the ‘core’ Funkestra (Mike, Eran, Jim, Sid, Taggie and Dave). One of the great guest musicians on ‘The Cooker’ is funk tenor saxophone legend Lenny Pickett. So how come I really wanted him to be on the record? 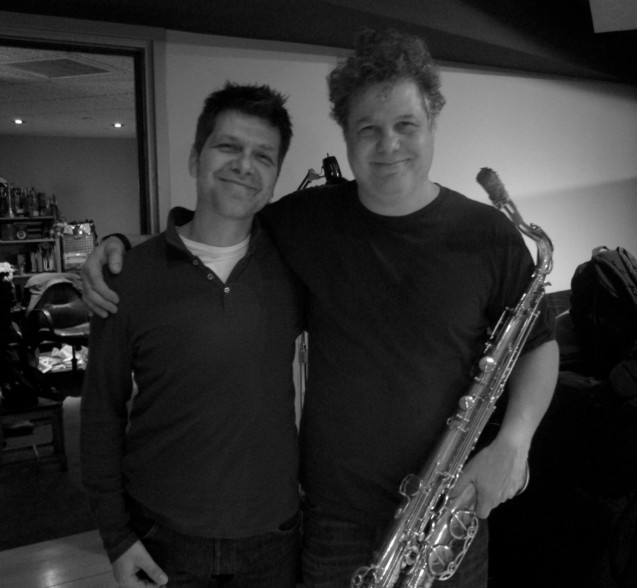 I remember very clearly when I first heard Lenny Pickett – it was the late 80s and I was in a ‘tour bus’ (we are talking about a removal type van with 9 seats, 9 guys and all the equipment in the back) on the way to Italy, playing with a R’n’B band called ‘The Booze Family’, run by my late and great friend Bernie ‘Big B’ Auer (to whom I dedicated ‘The Cooker’). The radio in the ‘tour bus’ was not working, instead we had a ghetto blaster on the dashboard and the CD that we listened to was ‘Live and in Living Color’ by Tower of Power. We were all groovin’ to the music (against a strange alpine theme-park type of background) when ‘Knock Yourself Out’ came on. The tune has a killer energy and when Lenny Pickett works his horn – it was just electrifying from the beginning to the end. I listened to Jazz tenor sax players quiet a bit – but this was something else – funk tenor saxophone with jazz flavors…I instantly loved it! Today I know that the album was recorded and released in 1976 and it clearly took quite some time to reach my earlobes – but when the music is great it really does not matter when it was recorded or at which point in time it will touch someone’s heart and soul (in this case mine). From that point onwards I was hooked not only on Tower of Power but also the exquisite and fiery playing of Lenny Pickett.

Of course we had to see TOP live in concert but at the time Lenny was no longer in the band. However, he released an album called ‘Lenny Pickett with the Borneo Horns’. I absolutely loved this album. Luckily for me he also came to my hometown to perform with the Borneo Horns. Some of the members of ‘The Booze Family’ went down to check it out and we were all blown away – what a great band, made up of ‘only’ horn players. I still think the record is awesome! At the time I was way to shy to approach bandleader Lenny – and what could I have said to him anyway? Well, maybe something like: ‘I absolutely loved your show and thank you for all your inspirational playing on all the classic Tower of Power records’…’I guess I wasn’t mature/confident enough.

So, let’s turn the time dial to about 20 years later and I find myself in New York in a studio with Lenny recording two songs for ‘The Cooker’. How did that happen? Bizarrely, it was master bassist Will Lee who hooked me up with Lenny. I contacted Lenny via email and asked if he would be up for playing on one of my tracks – and he said ‘yes’ as simple as that. He also got me in touch with John Kilgore whose studio he suggested we should use and so we did. As I was not sure which song would be best suit Lenny, I played him two – one was ‘Bo and Rhino’ and the other ‘The Cooker’. I asked him to pick his favorite out of the two but instead he said he will play on both:-) What a cat!

Luckily there is quite a bit of video footage of me talking to Lenny and Joe as well as some snippets of him playing on the tracks. I will upload them all eventually but in the meanwhile you can check out this short video.

It was real fun talking to him and asking him all sorts of questions about recording, playing live, Tower of Power, the 70s and that kind of thing. Would love to hear your thoughts on what he had to say about all these things!

So, there you have it, that’s the story on ‘Why I asked Lenny to play on ‘The Cooker’. For me the thrill to get to meet different generations of Funk/Jazz musicians and to hear them play my music is very hard to describe with words (but here a feeble attempt:-): it is totally exciting, nerve-wrecking, rewarding and also gives me the impression (hopefully not just an illusion) that I’m connecting our music to the pioneers of the style, linking the decades and generations together – a long honored tradition in music making…my hope is also that by having Lenny on our album that the younger generations will learn about Lenny and have a similar thrill when they will hear for the first time ‘Knock Yourself Out’ on ‘Live and in Living Color. Hopefully this will also create some reference points when they will listen to ‘The Cooker’.

Thank you Lenny Pickett, you are the cat and I can’t wait to hear what you, the reader and listener, will make of the tunes!