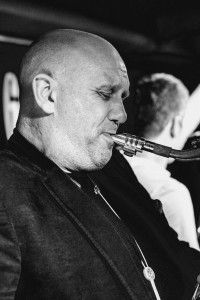 Rob is a fantastic saxophone player (both tenor and bari) and brings a wonderful warm, soulful and funky style to the band. Always impeccably dressed he always delivers a rock solid, ?rootsy? and grounded feel to the band both off and on stage.

His career as a jazz musician started whilst the was studying graphic design at Art school in Bristol. He has since performed and recorded with artists like Rufus Wainwright, Roxy Music?s Bryan Ferry, the Humphrey Lyttelton Band, a long stint with the Pasadena Roof Orchestra, The Echoes of Ellington, the BBC Big Band and his own Gerry Mulligan Concert Jazz Band, as well as plenty of film sessions.

?? Robert has the kind of juicy cavernous sound and wide open phrasing that had become virtually extinct, although it is now making a cautious comeback, thanks to players like him.? (Dave Gelly, The Observer)