What a thrilling three days!

Last week the Funkestra played a fantastic concert with the RNCM Session Orchestra at the RNCM theatre in Manchester – I think it is safe to say that it was a funktastic success! 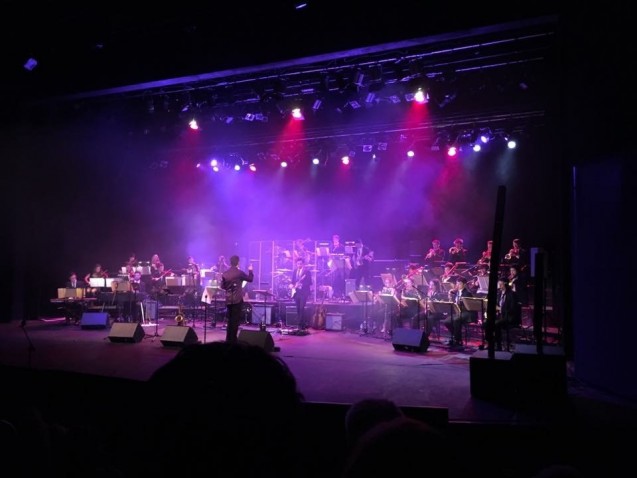 This event – all over too soon – started when Andy Stott, who heads up the RNCM Popular Music programme, asked me if I would be interested in taking the band up, workshopping with students and playing a joint show of my music – this was early autumn – and, of course, like all musicians I said -?yes? – although the music wasn?t arranged yet..since then all sorts of continuous activities have taken place to make it happen.

First thing was to call master arranger Peter Tomasso to adapt our 5 horn arrangements to 13 horn arrangements – which he did with customary enthusiasm and masterful skills. We added string arranger Pete Withfield?s string arrangements to my ?imaginary 70s cop movie theme tunes’ (?Mr Goyle?, ?Funky Barbarella?, ?The Time Thief?). Then it was time to get Phil Knights to engrave all the Big Band parts – quiet an undertaking. Once they were finished it was a matter of printing them out (around 1k+ pages of music) which I then taped together – in case you?re wondering, yes, it took days, actually weeks?

We called a Big Band rehearsal down here in London and boosted the Funkestra ranks with ridiculously talented National Youth Jazz Orchestra trumpets, saxophones and trombones (a BIG thank you to Roger Wilson who fixed them for me). After this rehearsal I knew that we were ready to go North. Pete also did a great job running the rehearsal – as I had next to no voice and a nasty bug struck me down for two weeks afterwards – not ?ideal? timing in the run-up to the gig – but no reason for a funk soldier to not march on:-)

By the time we finally went North – it was all but forgotten – not like the ridiculous weight of the bag with all the charts/pad in it though – monstrous! Can?t wait to switch to tablet/digital performance?

Mike, Eran, Simon, Paul, Steve and myself had two great days with the super talented, friendly AND polite students from the RNCM Popular Music Programme. It was so much fun to work with them on the music and to hear other musicians interpret tunes that we?ve been playing for some time, some of them for 10 years!

By the time Saturday came around we were all super excited – of course, most of all, me! We all felt super taken care off by the RNCM and were ready to go for it.

I was very happy, peeking into the auditorium, that the RNCM theater was nearly packed to capacity – all whilst ?Mercy, Mercy, Mercy? by Cannonball Adderly/Joe Zawinul was ?grooving? out of the PA.

We started the show with three Funkestra tunes, Mike starting off on drums only – followed by a fantastic and extensive solo by Simon – the rest of us then came on stage and joined in. Great vibes and although the monitor system just didn?t want to play ball for us and we had to ?fly blind? for our set, the experience of all Funkestra members came through and everyone put on a spirited performance.

Now it was time for the first major change over and the 13 horns and 8 rhythm section players came on stage. After a brief introduction, we were off! What a fantastic feeling and the crowd seemed to really dig it too. We finished the first set by inviting on the RNCM session singers, Lisa Olivant on lead vocals, who gave a stunning rendition of ?You can?t hide? from our 2nd album ?Falling from Insanity?.

The break, as you can imagine, just flew by and now it was time for another set of rhythm section players and also the string ensemble, 8 strong. In the changeover disaster struck in the form of one of the musicians by accident knocking over ?Princess? (my purple Hofner bass) and it literally smashed into two pieces. Aspiring to be a fearless bandleader, I tried to not bat an eyelid and started the set. As it happens, the musician who knocked over (or should I say ?accidentally destroyed?) my bass had to play the opening first 8 bars of ?Funky Barbarella? on his own – a tricky task as his mind must have been elsewhere:-)

After the ?accident? all of us, the audience, orchestra and myself gathered our thoughts and we were all back to the task at hand – to enjoy a spectacular funk blast!
Hearing some of my tunes with full Big Band horns and a live string section was absolutely mesmerizing and amazing and it took me days to get my Cheshire cat grin off my face.

After we played the ?imaginary 70?s cop movie theme tunes’ set, the final RNCM rhythm section of 8 joined us whilst the string section were showered with a hefty dose of applause whilst bowing and exiting. 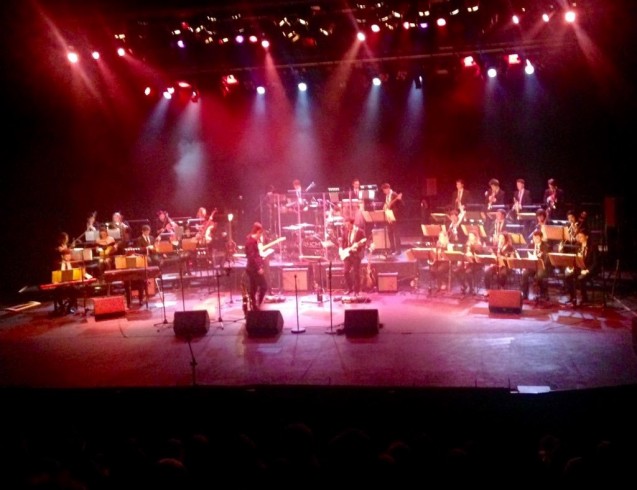 I loved the fact that we took it down a few notches after the string tunes to ramp up to ?Tricknologists? our penultimate number – it was the proverbial blast, particularly towards the end. Luckily the crowd was entirely on our side and demanded an encore. After my heart-felt thank yous we invited Andy Stott to say a few additional closing words and, wait for it, not only play the cowbell for the last tune ?Boozing Wizards? – but also to start the tune with it – a hugely important moment which he delivered with good humour and proficiency as the opening of this tune is my musical impression of ?Boozing Wizards searching for the Stone of Funk? – hence, not entirely on the serious side (to quote a bit of Tower of Power).

The band at this point was a mixture of all Funkestra members and the RNCM session orchestra – there were some ?hot? trumpet exchanges with all of them getting a turn as well as a ?guitar battle? and a moment of the ?free fall? noises from the whole band – as I said, this tune is an homage to early ?Lounge Lizards? – in short, not entirely serious.

We all bowed a few times to say farewell to the thunderous crowd and left the stage with a warm cosy feeling that we?ve done good, i.e. my personal favourite means of measuring how it went – ?happy faces? all round. This was amplified by great vibes backstage, in the cafeteria of the RNCM (so much fun and talking) and beyond as we all felt it was time to have a little relax, fun and celebration.

What a thrilling three days – happy faces all around! When can we do it all again?

Here?s what some of the guys wanted to add:

?I had a great time working with the RNCM students; such great players and lovely people. Their brilliant musicianship and relentless enthusiasm made the whole experience a joy. OK, tripping over a lead and falling down unceremoniously in the dress rehearsal (I tried to keep brave face but not sure I pulled it off) was a low point, along with some pretty horrendous monitoring issues during our actual performance. Apart from that, the whole experience was amazing. Big thanks to Andy Stott, Katie Chatburn and everyone responsible for bringing us up to Manchester – let?s do it all again soon!??

?I think you should mention my achievement in finishing off the Chefs Challenge (hot curry and a naan bread as big as Steve Pringle) at Akbars on the Friday night…. and winning a free desert that I then had to share as I was so full!?

– How many tines can be broken over three days? by Steve Pringle
– ?The guitar amp that just couldn?t be set to 2 and instead, on its own account, kept on setting itself to 3 1/2? by Eran Kendler
– ?What REALLY happened to ?Princess, the I.? by Stefan
– ?How Jazz Funk brings happiness – medically proven by a case study of George G.? by Stefan
– “The myriad of ways on how to disentangle the ‘RNCM’ abbreviation” by Andy Stott

Last but not least – thank you to everybody involved in making this event possible:

Phil Gregory and his team for the excellent front of house sound and all other sonic matters.

The principle of the RNCM Linda Merrick, Katie Chatburn, Frances Hine and last but not least Andy Stott, the fearless and visionary leader of the RNCM Popular Music Programme.

PS: and everybody else who I might have not mentioned yet and helped to make it all come together!

Sunday, 3rd of July ?we’ll be in the open air on the Main Stage of the Haslemere Festival! 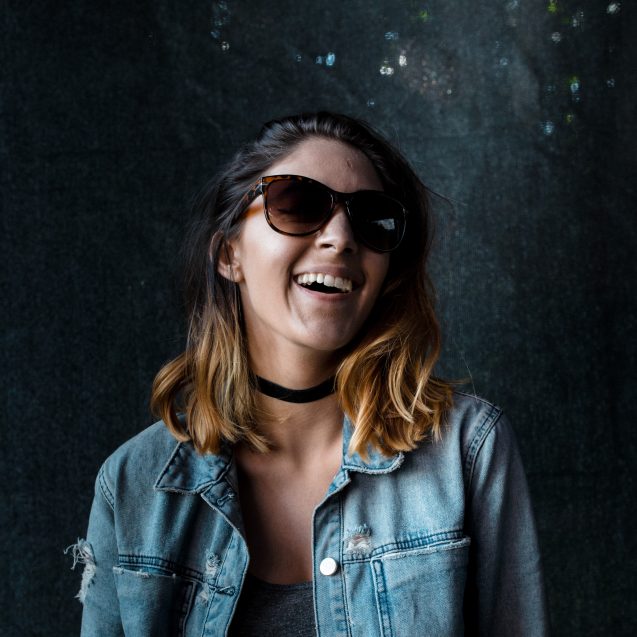 Feat. Lisa Olivant on vocals – all the way from the RNCM in Manchester. Read more about Lisa here.

Watch Lisa perform the Funkestra original ‘You Can’t Hide‘ (from ‘Falling from Insanity’) with the Royal Northern College of Music Session orchestra under the leadership of Stefan (performing with an iPad rather than bass) here.

Get your tickets here!