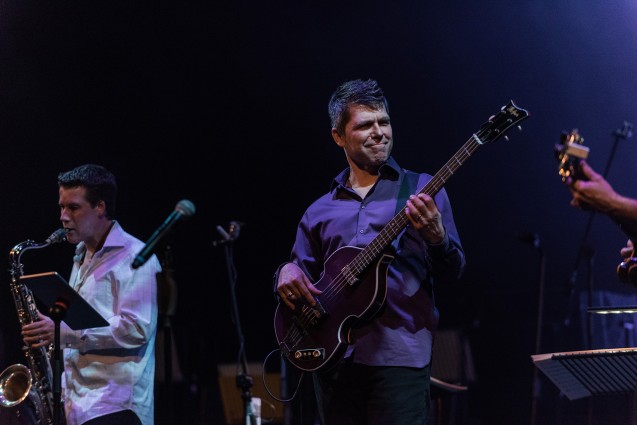 It was only about a year ago that thanks to the lovely people from Hofner I received a beautiful purple Hofner bass – in the colour of the artwork of ?Dr Hypenstein?, our latest record.

I wrote about ?her? extensively in my thank you blog from January last year – also explaining the peculiar name ?Princess?.

Highlights of her brief but exciting life was producing low frequencies for the lovely Joss Stone and providing a nice juxtaposition to her pink dress but also feat. on ?Guilty? and ?The Time Thief? – two tracks from the forthcoming ?The Time Thief? record. Princess enjoyed finding a place in music that she normally isn?t so familiar with – and, as expected, she did a marvellous job – responding delightfully well to wah pedals and the tiniest of variations of pick-up hand positioning.

So all went well until that fateful day of the Funkestra and the RNCM Session Orchestra concert. Proud as she was – Princess was prominently displayed on the large stage, one level up with the drums and percussion players – for everyone to see. 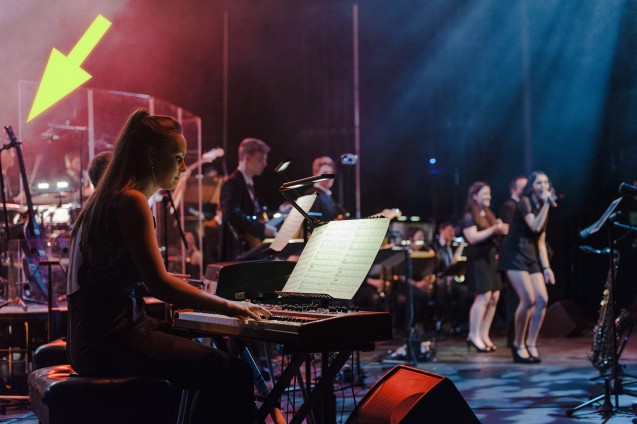 [Princess, the I. and Hannah Rose on keys during the concert; photo courtesy of RNCM]

Or so she thought – she was definitely not seen by the unfortunate session orchestra player who accidentally knocked her over (including the stand – thanks again for lending me the stand, Dan!), followed by a reasonably long fall, which resulted in her smashing onto the stage and literally snapping in two (BANG!).

Obviously I was purely focusing on the task at hand, i.e. guiding the very talented orchestra through the music. However, I couldn?t help but notice that I had a subtle smile on my face, although I should have been horrified. Of course I was but very deep down in this particular moment – probably a self-defense mechanism – I couldn?t help but seeing the ‘funny’ side to the situation – here I was with a 30 piece orchestra on stage and about 600 people in the audience bearing witness to something, well, quite extraordinarily out of the ordinary.

It is safe to say that quite a few people on both sides (stage and auditorium) would have asked – ?OMG! – what is he going to do?? – well, besides my personal loss, my main focus is to not let anyone down – not the orchestra nor the audience – so, as best as I could – I didn?t bet an eyelid and I continued with the concert, trying to encourage everyone to not be negatively affected. A bit like a ?don?t give in to the dark side? situation. 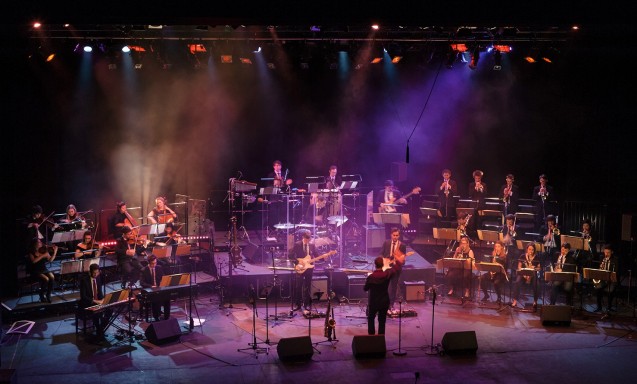 [Stefan conducting the RNCM Session Orchestra from his iPad; photo courtesy of RNCM]

To add insult to injury, there was an 8 bar solo intro that the unfortunate session orchestra player had to perform right after knocking the bass over and having to set up his guitar and amp. However, he managed to get through it (nearly) unaffected – I thought he was slightly less ?nervy? in the rehearsals – understandably:-)

Apparently I said to the crowd ?spoils of war? and ?I?ll cry into my pillow later? – not that I recall exactly?also, unbeknownst to me, Simon, our sax player, called for the stage manager to come on stage and remove the recently deceased ?Princess?. This she did, apparently with great aplomb, by holding the two pieces up in the air for all to see – this would explain an un-explainable ?hushed moment? during the performance.

There was also the small matter that I still needed a bass for our encore, when both the Funkestra and the RNCM session orchestra were joining forces. At first I was kindly handed a 5 string bass, which I politely refused. This was followed by a four string beast of a bass (thank you Chris!) which I rather liked – how cruel, so little time has passed after Princess was no more (which I didn?t know at the time as I firmly believed that she could be brought back to live, kind of a Princenstein of a bass:-) 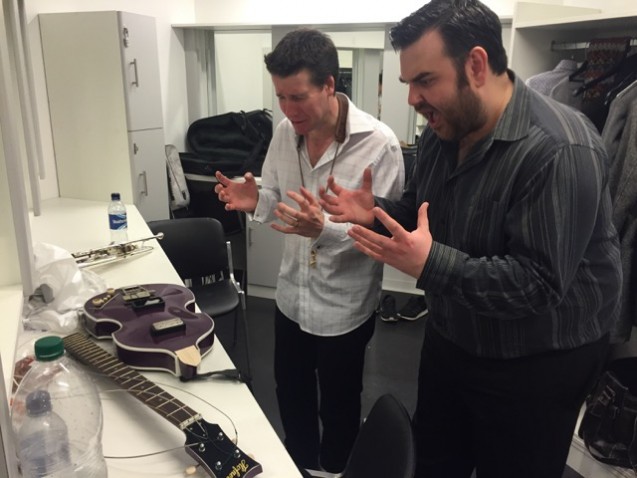 After the concert that seems to have left everyone with a smiley face, we all deserved a relaxing drink at the RNCM cafeteria. Besides musicians and audience being most complimentary about the music, two stories dominated the conversation – one – Andy Stott, head of Popular Music, playing cowbell in the encore (he never before has performed with his session orchestra – dare I say it, we all wanted ?more cowbell!?), and – two – the demise of ?Princess, the I?.

I got to hear the whole gamut of possible reactions – from sincerely horrified musicians who were too scared to even ask about Princess and how I felt about it, to impromptu nick names like ?Funk roadkill?, ?brilliant stage show?, pre-planned part of the show and ?let?s add this to all shows?? 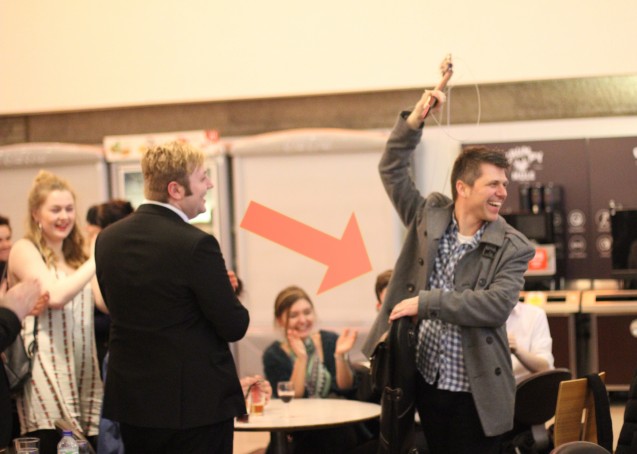 [Arrow pointing at the unfortunate RNCM orchestra musician whose identity, for security reasons, shall be protected:-)]

What happened next? After we left Manchester I had a carefully wrapped Princess in my case, hopeful that soon she will be on her way to Bavaria, where the H?fner HQs are. That, however, wouldn?t be. After I?ve sent some pictures to assess the damage it became clear that Princess was truly no more.

Cathy Harrison and Nick Wass from H?fner were absolutely amazing and fabulous in guiding me through this trauma and helped me to replace ?Princess, the I.? with ?Princess, the II.? which arrived within one week in my house. Can?t stress enough how grateful and impressed I am by their help! They truly deserve a medal! 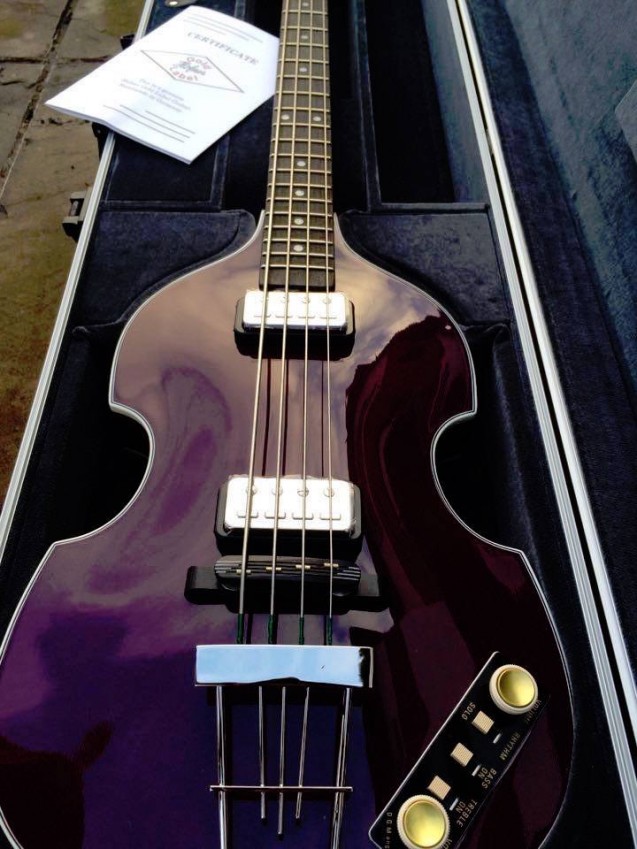 [From Bavaria, with love, straight out of the case]