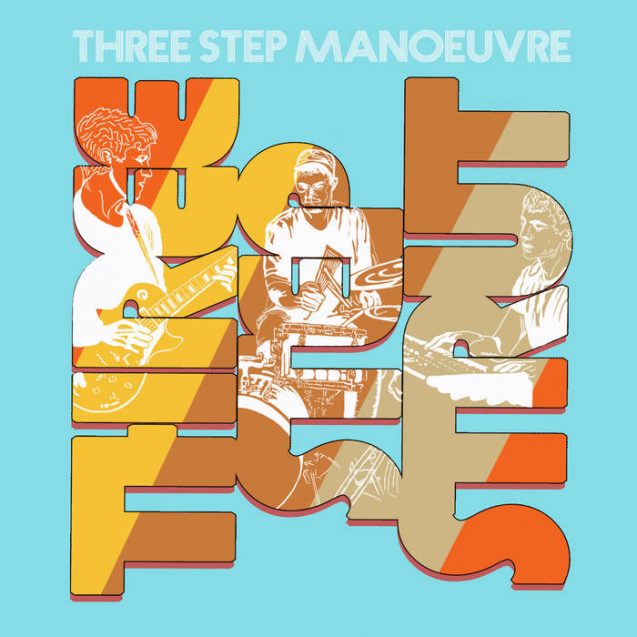 Dammit! Time is moving way too fast. Oscar has sent me this album quite a while ago and although I have listened to it loads – I haven?t seem to have the chance to tell him how great I think this album is! So, just made myself a lovely Espresso and finally sit down in the Devon sun to write down what I?ve been thinking on countless car journeys whistling along to their tunes.

All three musicians sound great on their respective instrument and seemed to have found their ‘mojo’ as a trio as their interplay seems at ease and I guess they have spent a fair few hours with each other playing and making music.

Really enjoying the length of the album too – not too short nor too long – more in the vein of a vinyl record with two sides – perfect time and all tunes have distinctive characters from each other. No mean feat!

The music is a lovely potpourri of different funk styles and artists from the classic bands to contemporary influences. Clearly there is a strong Meters influence but naturally a Soulive touch as well, not least because of the line up.

The first track ?Three Step Manoeuvre? is an overture in three acts – a fun introduction to the album – the three changes of pace are surprising – even unsettling at first but on after a few listens become familiar and show clear purpose in constructing an interesting funk (jazz) tune.

The 2nd song ?The Drill Song? – although with some ?fusion? influences, still serves up a ‘hum-able’ melody – something which is going through most songs – solid tunes with catchy melodies. The arrangement is imaginative and the guitarists has fun with muted and open notes playing techniques (a bit of a nerdy fact but it just catches my attention every time:-).

Track three – ?Grant?s Party? – a high octane song as the name implies – great groove and energy and yet again a very memorably and catch melody as well as riffs which will have you sing and whistle along in no time. The flute solo by Gareth Lockrane is a great sonic addition to the trio who know how to make the most of their sonic arsenal regardless.

My personal favorite is track 4 ?Throwback? – the groove and chords in the opening have a mesmerizing character and remind me of early Eryka Badu records. The slightly harder edge riff with crunchy guitar sound is augmented by a supercool melody played by the organ followed by a slightly psychedelic section which is reminiscent of Martin, Medeski and Wood – the sound escapes are very cool – I just love this track with it twists and turns and ?gear shifts? – again – very memorable riffs and melodies make this tune vibrant and catchy.

A fun idea – take a song by The Who (?Won?t Be Fooled Again?) and give it a funk treatment – inviting vocalist Cherise Adams-Burnett – and a horn section – and it works. Clearly influenced by the grooves of James Brown and the JB horns (honking 60s Soul Bari et al) as well as some Motown vibes. Letting the band rip in the tag is surely a great thing to watch and listen to at their live gigs.

Track 6 (in my mind track 1 of the B side) ?Southern Fried? is a fantastically catchy track – the melody is a seriously happy-must-whistle-along type and also clearly shows the long reaching influence of the Meters as well as the crisp guitar sounds of Steve Cropper – the Staxs label and also Booker T & The MG in particular. The melody is also super cheeky – super simple – and equally catchy. Booker T is lurking from behind the corner when the Hammond takes over the melody. The super syncopated stop section seems slightly out of character with the rest of the tune but doesn?t hinder my enjoyment a tiny bit. Yet again the guitarist enjoys some prominent muted guitar notes as in ?The Drill song? – a good contrast to his otherwise pristine soul/funk guitar sound. A guaranteed head ?bopper?.

Track 7 ?Early?s Cafe? is taken us to Church with a very Gospel influenced vibe and some cool Grant Green meets Scofield with MMW vibes. There is a lovely joy-de-vivre in this tune and the positive energy is infectious. The single ?Yeah? Meters style vocal rendition is a little random but nonetheless great fun and just makes me smile! The swampy guitar solo has a good amount of grid to it and there is even a mini excursion in the land of swing – luckily not for too long before returning to save funk grounds!

Track 8 ?Topsham Twist? – sounds like an homage to Galactic and their drummer Stanton Moore as well as a massive nod towards the New Orleans Funk scene in general. And there it goes again – a catchy melody performed by the guitar – very cool.

Track 9 ?Melon Collie Flower? – has a smooth vibe with a jazzier/fusion like approach – not unlike the Crusaders or the original Stuff. There are even some Benson licks in the guitar solo:-) Chilled!

Track 10 ?The 145? – Kick out the last tune on the album and have fun with this upbeat and unashamedly funky tune with a melody that at times has a Bluegrass/Fingerpicking country soul vibe to it. Again, all the riffs have a sing/whistle along quality to them which makes this album so enjoyable to listen to. Not ?just? grooves but also ?tunes? and clever arrangements – a successful funk exploration. The end has a upbeat – kind of Fatboy Slim Breakbeat vibe to it and just helps the feel good vibes all-round.

A catchy, super groovey, fresh and inspired album – the future of funk is is save hands with these guys struttin? their stuff – can?t wait to hear what their next offering is going to be like and in which direction they will take it – more vocals, expand the band, more experimental, more Jazz – I?ll be there to support it whatever it is going to be ?as long as it is funky:-)

Get the album here.